Happy Solstice and blessed holidays to all, whatever special days you celebrate!

As the sun sets over these short days, I sink into a cushion of gratefulness that Tim and I made a big change this year and moved to the tropics, where there are nearly eleven hours of daylight every day—even this week, during the shortest days of the year.

I love the light—I sleep better at night with more hours of daylight, and of course I love the play of light here on Maui. I took the above photo in August, when the papayas were hanging full and ripe on the tree. We at that fruit long ago (so sunshine-sweet!), but the blessings of light continue—the way the sea sometimes turns purple at twilight, for instance, as it did that day.

In October I made good on a years-long dream of getting scuba certified—and the worlds underwater are opening up. Yellow fish with black stripes, purple-chocolate fish with transparent fins and pink tails, a few suction cups of an otherwise-hidden octopus, a white-tipped shark resting under an overhang—my eyes are learning to see all over again. Dive by dive they’re getting trained to recognize beings so alien to those of us who dwell on land. My ears are alert for the faint song of humpback whales, who mate and raise their young around Maui during the winter. I heard humpback song for the first time, distant and haunting, during a dive last week.

An enormous turtle floats leisurely by, and we pause to give it traveling room—and to take in the wonder of its hawklike beak and old and knowing eyes. Our local hawksbill turtle conservation group will want to hear about this sighting, but alas, I don’t yet have an underwater camera so can’t match its head and scale markings to their gallery of known individuals in and around Maui waters.

What a precious opportunity, every time I enter the water, to practice opening to new creatures, appreciating their scaled, fin-waving contributions to the great dance of life! I am connecting with nature in completely new ways during this new chapter of life. 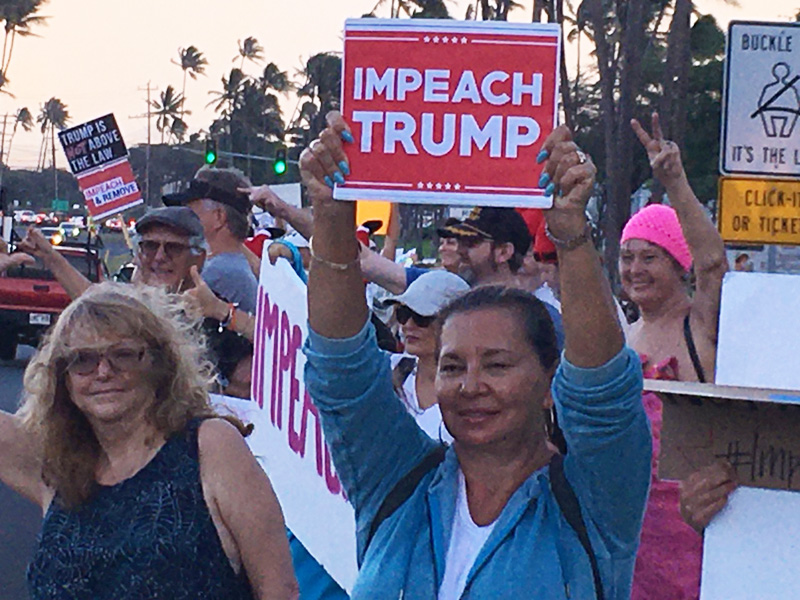 At the same time, the winter holidays this year are especially fraught, as our country works to hold accountable a lawless president who, with his administration, chooses cruelty as policy.

This week Tim and I stood alongside nearly three hundred Maui neighbors in support of democracy and against autocracy. Along with thousands of people around the country, we called for impeachment. Now that the president has indeed been impeached, we are pausing, waiting for what will happen next.

Times of change, whether in personal or national life, hold tremendous possibility. The old ways are cracking, something new is emerging—but we can’t yet see what it is.

There is a crack in everything; that’s how the light gets in. —Leonard Cohen

When the cracks grow massive, as they do in today’s world, the possibilities for change—and light—open right along with them.

After Trump was elected, I felt brushed by despair. I sought out a quiet spot to sit in meditation with my spiritual friend, Bear. (Your own still small voice may take a different form; my story with Bear is told in Tamed by a Bear.)

Bear has a habit of reframing things. In this case he showed me images of the suddenly massive possibilities for change. Old structures had just been smashed. Old assumptions were falling away. We were experiencing a rich moment of possibility. “This is a time,” Bear said, “when you have more-than-usual power to effect change.”

When old structures are already falling, no more energy is needed to break through them. We can focus instead on setting new directions and creating new structures. In a moment such as this, Bear observed, our efforts will be supported by the sweeping momentum of change. Each of us might want to seize this possibility in whatever way we can to take advantage of its power.

Using the cracks to let in light

Three years later, I see the wisdom of Bear’s words. The changes are only continuing. Yet those cracks in the old can also be seen as cracks in the doors of possibility. In our time the doors of the old are cracking open unusually wide.

Sometimes these cracks provide a toehold for more cruelty. But for people who are wishing and working for a more equal and loving world, those doors open as well to the light of the new. We can cram our feet and then our shoulders in to wedge those doors wide open if we choose. We can do our part in turning the arc of history toward justice and allowing love to flow across borders and boundaries that have too rarely been crossed.

Reality as it was before is cracking wide open. We are invited to make good use of the possibility.

I wish you a New Year full of possibility—and the heart to seize it and turn it in whatever way is yours toward new light.

Responses to Cracks of possibility